It used to be said that the average US business mailing address (snail mail) changes once every 9 months. (That’s individuals moving, not companies.) Fast-forward to today’s highly mobile workforce, where people change jobs like the proverbial underwear, throw in a volatile economy, and more than one-third of the email addresses in your marketing database could change each and every year*. The result: more hard bounces and unsubscribes.

There is one simple technique, however, that can reduce the turnover. I was reminded of this when I changed companies late last year. When I went to my favorite e-newsletters, blogs, and online periodicals to change my email address, I discovered in most cases that I had no such option. In fact, my only option was to unsubscribe, and then re-subscribe with my new address.

That’s crazy. Your subscribers, customers, prospects, ANYONE that you email regularly, should have an easy, intuitive, immediately accessible means of updating his/her contact information, including email address.

At our agency, when we send emails – for example, to blog subscribers – we include this “update profile” option in two locations – one immediately under the body of the email (image at right), and another in the footer immediately under the unsubscribe link. This last option is critical, because when a subscriber is changing his/her email address, the first instinct will NOT be to provide you the new and correct information, but rather simply opt-out of further communication entirely. 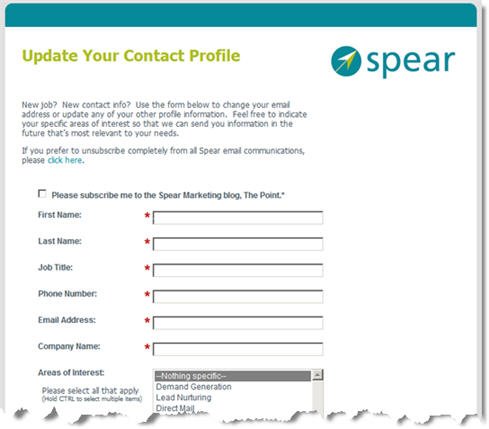 When a subscriber clicks on our “update profile” link, he/she gets taken to a simple landing page (at right) where it’s a quick and easy task to update the relevant data. Because we host our page on Marketo, the old information is pre-populated automatically for anyone who has previously opened one of our emails. As a result, we’re not asking the individual to complete the entire form; just to update the incorrect information.

Note also that we use the opportunity to do a little “progressive profiling,” that is, to learn a little more about our subscribers by asking them (optionally) to identify areas of interest. This gives us the ability, if we so choose, to send highly relevant content at a later date to subscribers who have particular areas of interest.

Don’t let your hard-earned contacts disappear due to the inevitable turnover. After all, you’ve earned them!

*As long ago as 2002, the Direct Marketing Association was reporting that fully 33% of people change their email address once per year. That figure has almost certainly increased in the 8 years since. Has anyone seen more recent statistics? If so, please include a link or reference in the comments.

One thought on “A Simple Technique for Reducing Bounces & Unsubscribes”