I wrote recently in this space about the resurgence of direct mail as a viable outbound component to an integrated demand generation strategy. Most of that resurgence is due to the benefits of using direct mail on its own merits, but there’s another factor: the greatly diminished effectiveness of rented email lists. 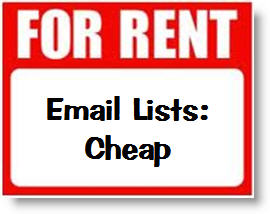 When the list industry “discovered” email in earnest back in the 90s, direct marketers like this blogger were enthralled with the potential of a new, hipper alternative to direct mail. Here was a way to reach targeted lists of B2B decision-makers and generate virtually instant results for our clients.

But the biggest advantage of third party opt-in email lists was cost. Even though the lists were expensive (50-60 cents per name once you added in various select criteria and broadcast charges), the savings in printing and postage made up for it. Email campaigns were still a fraction of the cost of direct mail.

Fast forward to today, and that cost advantage has essentially disappeared. I can vividly remember getting 8-10 percent response from rented lists in the early days, but even 1 percent response from a rented B2B email list today is considered wildly successful by most standards. And here’s the shocker: even while response rates have plummeted, the price of those lists (as I also commented recently) is the same as it was 15 years ago. Which means that even though the production cost of email is still attractive, the actual cost per response has skyrocketed.

If the cost of renting opt-in email lists had kept pace with email performance, names would now cost 5 to 10 cents each and email would continue to have a place in the direct marketing landscape. But list managers have priced themselves out of the market. In an era when inbound marketing (search, content marketing, social media) dominates demand generation strategy, email simply isn’t a viable candidate for lead acquisition any longer, except in the most unique circumstances.

Of course, direct mail isn’t getting any cheaper either, but direct mail response rates haven’t suffered to the same degree, and the list universe for direct mail is substantially larger than email, especially for non-technical contacts. All of which is causing marketers who in recent years were asking: “Why would I spend money on direct mail?” to take a second look.

Does the rented email list have a future? Are you having success with email lists, and if so, why? Anyone in the list business care to comment?