By now you’ve probably read about a momentous recent decision, and the very public reversal of that decision, made by Maker’s Mark, a distiller of small batch bourbon based in Loretto, Kentucky. The basic story is this: in February, Maker’s Mark announced that they would be reducing the alcohol content in their bourbon from 45 percent to 42 percent, ostensibly in order to boost supplies of its product to meet high consumer demand. A mere week later, after a firestorm of protest erupted on social media and the Internet in general, the company reversed course.

Pundits in the business press referred to the snafu as the company’s “New Coke Moment,” a reference to Coca Cola’s notorious decision (and subsequent reversal) in the mid-1980s to change its soft drink formula. As a fan of the Maker’s Mark brand (in moderation, of course, and in Manhattans) I followed this story with some interest. However, as the story evolved, the whiskey drinker in me retreated, and the marketer started to pay more attention. And I began to ask the question: what if the whole affair were not a mistake at all, but instead, a masterstroke of social media marketing?

A few data points to consider:

Upon announcing their reversal, the company cast itself as humbled, apologetic, and beholden to its many fans. In a public letter from the company’s COO and Chairman Emeritus, the executives said: “Your trust, loyalty and passion are what’s (sic) most important. We realize we can’t lose sight of that. Thanks for your honesty and for reminding us what makes Maker’s Mark, and its fans, so special.”

Let’s translate, shall we? We have loyal and passionate fans. We have a very special product. And this affair has reminded us of just how special you are and how seriously you take our brand. (Group hug.) 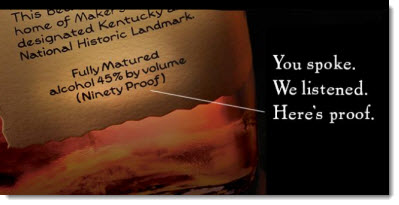 Point #2: according to Forbes Magazine, on February 9 (before the initial announcement) Maker’s Mark’s “Attention Score” was 8, meaning that roughly 8% of the 21 and over US population had heard of the brand. On February 17, the day the reversal was announced, that score was 14. On February 27, the score was 24, the highest the brand had scored in six years. Measures of brand perception, meanwhile, took a beating upon the initial decision, but that trend reversed quickly, and at last count the numbers were almost recovered to their original levels.

Point #3: If you search on Google for Maker’s Mark today, the company’s PPC ad makes very specific reference to the controversy in the headline: “Maker’s Mark Bourbon – You Spoke. We Listened.” The same message also appeared on their Facebook page (image above.) So, far from ignoring the story and hoping it goes away, Maker’s Mark is aggressively marketing their mea culpa as a testament to customer loyalty. In effect, having been given lemons, they are making lemonade (albeit lemonade with a 45% Alcohol By Volume.)

Makes you wonder, doesn’t it?

So what can B2B marketers learn from a contrite whiskey distiller? Plenty:

• If you make a decision that upsets your customers, flog the reversal mercilessly as an homage to how strongly those customers feel about your brand (let’s call it: Mea Culpa Marketing)
• Not prone to such business errors? Consider, then – what “mistake” could you make, promptly reverse, and leverage to the hilt in the interest of brand awareness?

The possibilities are endless. Cheers!