On a recent conference call with a prospective client, the Vice President of Sales chimed in with a question:

“How many touches do you think it takes before someone becomes a lead?” 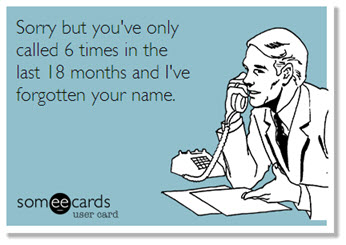 In the most diplomatic tone I could muster, I responded by stating that I didn’t think there was any correct answer to his question, and moreover, the question itself assumes a sales model that is not only long extinct, but runs completely counter to today’s modern B2B buyer behavior.

In fairness to my VP friend, he won’t be the last to ask the question (or its close cousin, “How many touches does it take to make a sale?”) What’s more surprising is that this outdated philosophy continues to merit serious discussion amongst B2B marketers and opinion-makers. A quick Web search yields dozens of blog posts and articles on the topic, many quoting the same source, a Doctor Jeffrey Lant and his “Rule of Seven,” a rule that states:

“You must contact your buyers a minimum of seven times in an 18-month period for them to remember you.”

Now, there may have been a time when the good Doctor’s rule held true, but in today’s Internet-driven world of content-centric marketing, the notion that ANY number of persistent touches is the formula to sales or marketing success is naïve at best.

Sorry, But “How Many Touches Does it Take to Make a Sale?” is No Longer a Valid Question via @spearmktg

The Rule of Seven harkens back to a day when the salesperson was in control, when buyers did little to no research before talking to vendors, and when marketing was simply a string of pitches extolling the virtues of a company’s product. Deliver that pitch a minimum number of times, the theory says, and buyers will be powerless to resist.

Today’s reality is a different world entirely. Here’s Kathleen Schaub, now Vice President of the CMO Advisory Practice at IDC, interviewed back in 2011:

“The Internet and social media have triggered a turbulent change – the rich dialog has shifted online and away from the sales person. Plus, B2B buyers have become expert buyers. They often know more than sales people. They engage with sales people later in the buying process. If your company has been persuasive online, you’ll make the short list. If not, there’s little hope for recovery.”

According to Sirius Decisions, 67 percent of the buying cycle is now conducted online, regardless of sales involvement. That means almost three-fourths of the buying process could be over before anyone in your organization has “touched” the prospect in any meaningful way.

Successful demand generation is no longer about beating buyers into submission, whether it takes 7 touches or 70. I suggest that, at its core, modern B2B marketing is about two things:

• Creating an effective online presence of 1) sufficient critical mass and 2) compelling content to engage with and capture prospects looking to solve the problem you can address, and

If timing, message, offer, and buyer needs align, it’s a process that can yield success in an instant. Or it could take months. But it has nothing to do with the number of touches.

3 thoughts on “Sorry, But “How Many Touches Does it Take to Make a Sale?” is No Longer a Valid Question”