Marketing software research firm Software Advice have released their 2014 B2B Demand Generation Benchmark Report, a handy reference for anyone planning 2015 marketing spend. Based on responses from more than 200 BtoB marketing professionals, it provides useful insight on the types of demand gen programs and content that are trending in the marketplace. (You can access the complete report on the Software Advice blog – no registration required.) 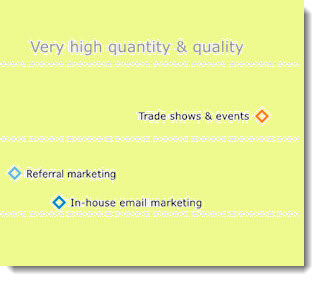 As with any research report, however, it’s wise to look at the data, and the conclusions drawn from that information, with a critical eye. In this case, to their credit, the analysts at Software Advice are candid about their sample population (mostly large companies) and where their results align with, or depart from, other recent industry research. However, they also draw some fairly dramatic conclusions from the data that, in this view of this writer, don’t stand up to closer scrutiny.

The conclusion that most caught my eye is the one that titles this blog post. To quote the report, “Trade shows were most commonly cited as generating both the most and the best (leads) …” And indeed, the data supports that observation: 77 percent of respondents said that trade shows generated either “somewhat” or “very high” quantities of leads, and 82 percent said that trade shows generated leads of either “good” or “excellent” quality.

The report, however, goes further – ranking trade shows as far and away the most effective demand gen channel in their “BtoB Channel Effectiveness Quadrant,” surpassing (by some margin) even demand gen workhorses like email marketing and PPC. And here’s where I think that analysis goes astray:

First, demand generation effectiveness is not best measured by which channel generates the highest number of “quality” leads. The ultimate measure of effectiveness is ROI, that is: if I spend a dollar on demand generation, which channel is going to generate the highest return on that investment? Trade shows may indeed generate a high number of leads, and even a high number of good leads, but they are also generally acknowledged to be a very expensive proposition. A tactic like PPC, however, may generate fewer leads overall, and possibly even a lower proportion of “quality” leads, but may ultimately deliver more pipeline or closed business as measured by ROI. (Note: in fairness, the quadrant does designate trade shows as a “high cost” channel.)

Second, let’s consider what the survey respondents most likely meant by “lead quality” in this context. Consider a scenario: if I embark on a social media campaign, for example, generate a thousand leads, and two hundred of those leads convert to customers twelve months later, were those quality leads? Most marketers would say “yes,” except this survey doesn’t really reflect the long-term value, and thus ROI, of different channels.

This is reinforced by another headline from the report: “Live Demo Offers Produce the Highest Quality Leads.” Again, this conclusion is based on more respondents naming demo offers as generating quality leads compared to other channels. Taken at face value, however, this implies that product companies should never engage in content marketing, or do anything other than offer prospects the opportunity to demo the product.

Clearly, what’s being interpreted as “quality” in this context is in fact “qualified”. Sure, demos attract more qualified leads, because prospects who want to view the product are inevitably further along in the sales process. But does that mean that demos are the most effective demand gen offer? Far from it. In tests we’ve conducted over the years with our high-tech clients, information offers (white papers, case studies, Webinars) generate 3 times the response compared to demos and free trials. Now, it’s true that white papers generate a wider spectrum of leads – some highly qualified, some merely “tire kickers.” But a white paper campaign may still yield a higher ROI if the close rate on those leads is more than one-third the rate of a similar campaign in which the sole call to action is a demo.

In fairness to Software Advice, the responses to the survey – and even the way the questions were structured – is also a reflection of the current state of BtoB campaign measurement. If more companies measured program ROI consistently, then you could ask “which programs generate the highest ROI” rather than inquire about the number of quality leads. Unfortunately, despite all the technologies available to us, the vast majority of B2B marketers still measure campaign success (and relative effectiveness) using metrics that fall short of the ideal.